by Bushra -
in Latest, Pakistan
0 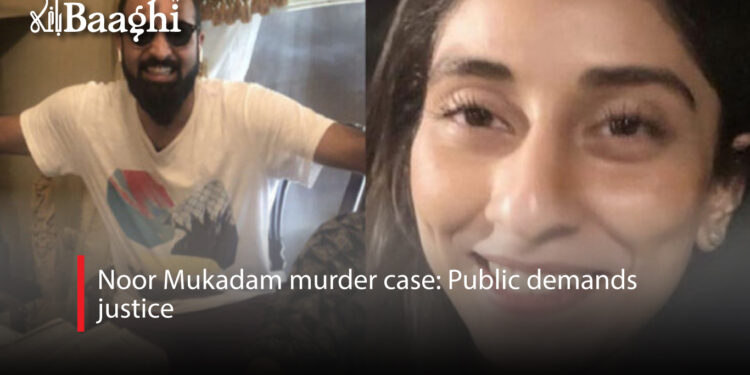 Noor Mukadam murderer Zahir Jaffer was mentally-ill:  Noor Mukadam, 27, was reportedly “shot and slaughtered” in an upscale residential area of Islamabad during the Eid holidays. Noor Mukadam was the daughter of former foreign service official Shaukat Mukadam, who served as Pakistan’s ambassador to South Korea and Kazakhstan.

“The gruesome murder and behead of an ex-diplomat’s daughter is being sent shockwaves across Pakistan.”

Zahir Jaffer identified as suspect has been taken into custody according to Police. Zahir Jaffer is a well-educated, talented person and reportedly a US citizen of Pakistani origin. Police found the victim’s body in the suspect’s house on Tuesday. Zahir Jafferr, known as a “friend” of the victim, was arrested over his alleged involvement in the murder. “The alleged killer is a son of a leading businessman of the country”.

As Zahir Jaffer was suffering from mental illness for a long period of time in this way he joined an institution to take education for getting rid of this disease. After this he decided to give therapy to others. Zahir Jaffer was also taking drugs and his parents was aware of these all things but they didn’t care about the facts.

Noor Mukadam was involved with Zahir Jaffer since three year. They rarely used to meet each other in the same house where Noor Mukadam murdered. On 20th July 2021, she went at Zahir Jafferr home but tell lie to their parents that she is going somewhere else.

ZaZahir Jaffer was a psycho and drug patient he got violent that day when Noor Mukadam was present at his home. He tortured  and beaten her aggressively. At first he shot her with his weapon and then slaughtered and finally beheaded with sharp knife.

The surrounding people gathered at her place by hearing shouted voices and tied him with a rope because he was getting violent. After this, police was called and finally arrested the accused person. Police obtained a three-day remand of the suspect from a local court, while officials said they were investigating the suspect’s motive for the crime.

Pakistan Foreign Office spokesperson Zahid Hafeez Chaudhry condemned the crime and expressed condolences to the family in a tweet. “Deeply saddened by the murder of the daughter of a senior colleague and former Ambassador of Pakistan. Heartfelt condolences to the bereaved family, and I hope the perpetrator of this heinous crime will be brought to justice,” Hafeez said on his Twitter handle.

Islamabad police have registered a case against the accused and an investigation is underway. Police said Noor was “slaughtered” after being shot. Another person was also injured in the incident.