President Alvi gives the PTI's three-year report card in a joint session with the Opposition boycotting the session in protest. 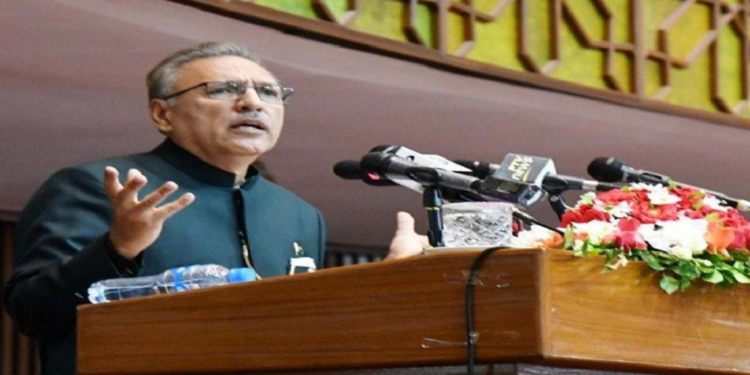 The president began his statement in the joint session of the parliament by discussing the economy. “Due to the government’s cautious measures, Pakistan’s economy did better than other countries despite the coronavirus.”

“You may make all the noise you want, but you have to face the truth – that the nation is moving forward,” the president remarked as the Opposition began thudding benches and causing a disturbance in Parliament.

According to Alvi, international investors’ faith in the government has grown by 60%, according to a study conducted by the Overseas Investors Chamber of Commerce and Industry. According to him, the Federal Board of Revenue has collected Rs160 more than its objective.

The president claimed that the rise in remittances and foreign investment indicated that people have faith in the current government.

President Alvi praised the administration for implementing all of the Financial Action Task Force’s (FATF) recommendations and creating legislation to satisfy the demands.

According to the president, the government’s “digiskills” initiative has benefited 1.7 million young people. “This is not a little sum; Pakistani freelancers have made $2 million in foreign cash.”

The government is fully aware of the industry’s ever-changing demands. “Artificial intelligence, cloud computing, software development, the internet of things, networking, data analysis, and other technologies will assist us in accelerating our growth.”

When it comes to cyber security, he believes Pakistan’s young can play a critical role in the country’s defence.

According to the president, the administration believes that only an educated and healthy Pakistan can progress, and that is why the PTI-led government implemented the Ehsaas programme.

The president stated that the government was focused on telemedicine in order to save money for the poor by allowing them to receive almost the same treatment over the phone.

He added that as the country’s population grows, it is getting more difficult for the government to provide health, food, transportation, water, and other essentials to the people.

“I believe that in order to provide the best for our children, we should promote birth spacing and focus on making the family smaller,” President Obama said.

Education
In terms of education, he stated that the government had issued as many as 240,000 scholarships under Prime Minister Imran Khan’s leadership, which he described as the “largest package” the government has ever given out.

The president stated, “The Higher Education Commission (HEC) has declared that it will remove tuition and dormitory fees for persons with various capacities.”

“We chose to give technical training and education to individuals on such a wide scale to drive Pakistan forward since an educated person can raise not only their own income, but also the country’s,” he explained.

Protests by the opposition
Meanwhile, all members of the Opposition and independents in both chambers of Parliament boycotted the presidential speech after holding a sit-in outside Parliament House to protest the formation of the Pakistan Media Development Authority (PMDA) and electronic voting equipment.

Journalists, on the other hand, were barred from entering the parliament’s press gallery before the session began. Members of the Parliamentary Reporters Association (PRA) held a demonstration inside Gate 1 of Parliament House in response.

US Dollar Attain  all-time High Versus the Pakistani rupee