PSX: The stock market is still optimistic about the progress of the IMF accord 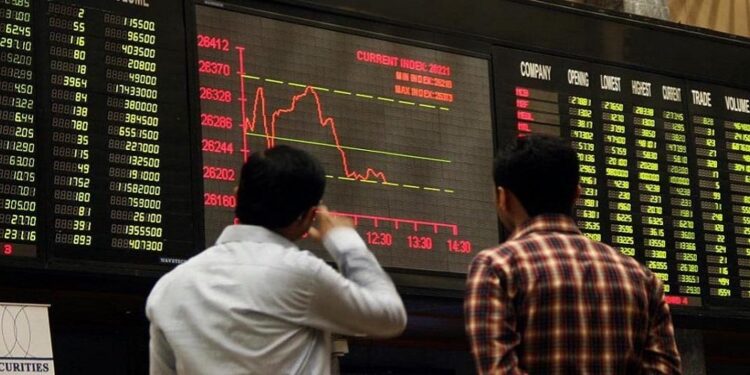 KARACHI: The Pakistan Stock Exchange opened in the green zone on Monday, boosting investor confidence after the government met all of the International Monetary Fund’s pre-conditions (IMF).

According to a Pearl Securities analyst, Prime Minister Imran Khan’s impending visit to China would also be a good event in the coming days.

“On the other hand, profit-taking was seen in the recent hours as worldwide oil prices soared beyond $90/barrel, while the government is preparing to raise petroleum product prices in February 2022,” he said.

There were 360 scrips active, with 237 advancings, 96 declinings, and 27 remaining stables.

According to a Topline Securities analyst, stocks ended the day on a bullish note, with Bank Al Falah, Colgate Palmolive, and TRG Pakistan adding a total of 104 points to the benchmark Index.

“The market stayed bullish throughout the day, reaching an intraday high of 384 points as investors celebrated news of Prime Minister Imran Khan’s trip to Beijing on February 3 to sign a $3 billion loan to stabilize foreign currency reserves,” he added.

Analysts predict the market to perform strongly when the IMF accord is approved on February 2, 2022, and propose that investors use a buy on dip approach in the next week.

Sapphire Fiber, which lost Rs22.31 to end at Rs838.67/share, and Philip Morris Pakistan, which lost Rs20 to conclude at Rs750/share, were among the firms that suffered the highest losses.