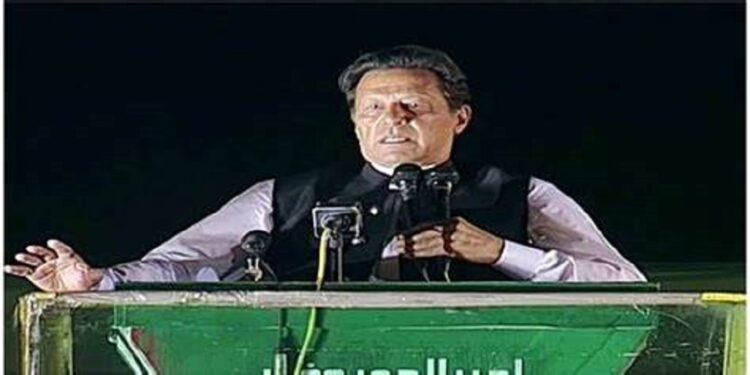 Former Prime Minister Imran Khan commended the people for taking to the streets on Sunday in response to his appeal, sending a powerful message to opponents and the rest of the world that Pakistan and Pakistanis were neither slaves nor sovereign nations.

He said he wanted to ask Pakistanis whether they were an independent country or if they were enslaved by foreign forces.

He said that no apology from the United States was required and that he would not surrender to anybody.

He said that he would go to every city in the country to raise awareness and inform citizens that they were an independent nation that would not submit to any nation.

On Wednesday night, he announced this while speaking at a massive public assembly in Peshawar.

Imran Khan said that he was imprisoned for the sake of ensuring the independence of the judiciary.

He said that the Sharif family as a whole was on bail because they had plundered the nation.

He slammed Prime Minister Shehbaz Sharif for cracking down on PTI social activists, saying that Shehbaz wouldn’t be able to silence their voices.

He went on to say that since 60 million Pakistanis had cellphones, the authorities will be unable to stop them from raising their voices.

Former Foreign Minister Shah Mahmood Qureshi remarked that when Shehbaz Sharif took the oath of office, Narender Modi was the first foreign figure to greet him because had shared interests.

He said that all other political parties have banded together to oppose Imran Khan because they are afraid of being held accountable.

He went on to say that Imran Khan and the Pakistan Tehreek-e-Insaf (PTI) would never bow down to any authority and would fight to the last end.

He went on to say that the opposition parties had been seeking new elections for three and a half years, but that they were now fleeing the polls after Imran Khan declared them.

Prime Minister Imran Khan has defended the cause of Islam and Pakistan at every international arena, according to National Assembly Deputy Speaker Qasim Suri, who also claims to have seen the letter in which threatening language was used against Imran Khan.

He asked Pakistan’s youth to support Imran Khan at this trying period.

Former Interior Minister Sheikh Rashid Ahmed addressed the throng, saying that when he first visited this location in 1970, the turnout was 10 times less than it is now. He went on to say that they (the allied government) will immediately impeach Pakistan’s president.

Chief Minister of Khyber Pakhtunkhwa (KP), Mahmood Khan, said that the province of KP and its people would not accept this imported administration, adding that Imran Khan is and always will be their prime minister.