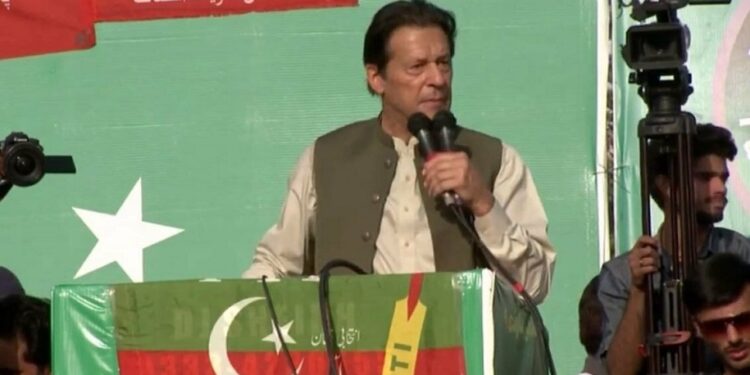 With the PTI’s long march to Islamabad nearing, former Prime Minister Imran Khan told the PML-N-led coalition government on Sunday that he would send two million people to the federal capital regardless of how many containers they erect as barriers.

“Our opponents claim that if the weather is hot, people would not come out.” Put as many containers as you want, but 2 million people will come to Islamabad,” the PTI leader told a crowd in Abbottabad.

The former prime minister informed his followers that the current administration “fears” their zeal and that 11 parties have banded together to depose him.

When the PTI chairman and his followers arrive in Islamabad, the federal capital will be filled with slogans of “imported hukomat na Manzoor” (imported government unacceptable) and “we want genuine freedom,” according to the PTI chairman.

Imran Khan continued his assertion that the US plotted to depose him, saying that the incumbent leaders were also complicit in the effort.

“These leaders will not be accepted by the Pakistani people,” the PTI chief said.

The former prime minister went on to declare that he was “never ready to be a part of the war on terror with the United States, and he was certainly not eager to grant Washington air bases.”

“Americans wanted a leader like Pervez Musharraf,” Khan alleged, “who would have obeyed them on a single call.”

The PTI chairman pointed his guns at Prime Minister Shehbaz Sharif, calling him a “beggar, servant, and thief.”

“I have never seen anybody spew such falsehoods before as the Sharif family has,” the PTI chief stated.

He went on to say that when the imported administration took control, all item’s prices rose.

Khan also asked the media to visit businesses and inquire about ghee pricing, as they did when he was in office.

When stolen money is moved outside, the value of the US dollar rises, according to the former prime minister, who added that the rupee’s value has been falling since the current administration took control.

IMF officials visit in Pakistan on Tuesday for crucial discussions

Karachi NA-240 By-Polls: ECP has yet to release 77 Nomination Papers