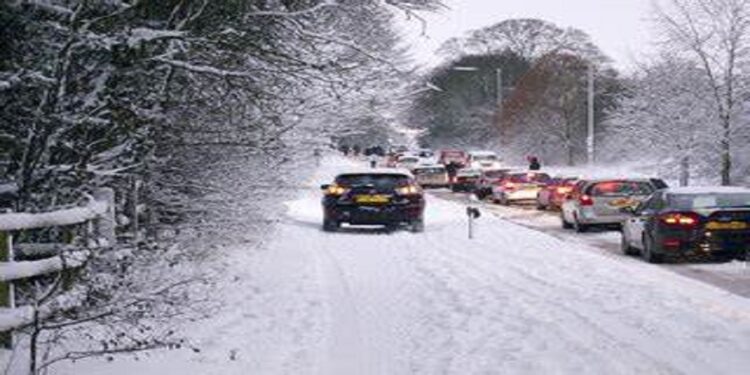 Following the unfortunate deaths of at least 21 tourists in their automobiles after getting stuck due to severe snowfall in the region, the federal government sent Pakistan Army and other civil-armed forces for rescue efforts in Murree on Saturday.

According to the local government, all highways in Murree were stopped for traffic after hundreds of cars reached the city at a time when “record snowfall” occurred.

Interior Minister Sheikh Rasheed claimed in a video message that the issue erupted when Murree saw “a high number of visitors after 15-20 years.”

Five platoons of the Pakistan Army have been called in for rescue attempts, according to the interior minister, while Rangers and the Frontier Corps will be deployed on an emergency basis.

“Since yesterday night, at least 1,000 vehicles have been trapped […] some have been evacuated; 16-19 people have died in automobiles. The trapped passengers were given food and blankets by the neighbours.”

The interior minister said that 1,000 cars would be evacuated by this evening, and that the highways to Murree would be blocked until 9 p.m. tomorrow.

“We’ve also decided to prohibit visitors from walking into Murree; now is not the time to visit Murree,” Rasheed remarked.

‘Tourists did not perish from the cold.’

“There have been approximately 4 to 4.5 feet of snowfall in Murree,” SHO Murree Police Station Raja Rasheed . This much snow has never fallen in this location before.”

He said that the majority of those who perished in Murree did not succumb to the cold; rather, they died because they left their vehicle heaters on and went to sleep.

“They were murdered by the heater fumes.”

‘The government is to blame for my cousin’s death.’

Tayyab Gondal, the cousin of Naveed Iqbal, a police officer who died in Murree, blamed his relative’s death on the “incompetent” administration as he sobbed.

“The route from GT Road to Murree was clean; but, as soon as we reached Murree, the flow of traffic came to a halt. At the toll plaza, the local authority did not stop us “Gondal said.

According to Gondal, “My family members would still be alive today if it hadn’t been for the government’s carelessness. The government’s negligence is to blame for the [killing of the people].”

“We have tourist attractions, but no one to maintain them,” he said.

He went on to say that some families are still waiting for help. “I gave [the local government] my current location, but no one responded to provide assistance.”

According to rescue authorities, ASI Iqbal, his wife, four children, and two boys are among the dead.

Murree has been declared a disaster-stricken area in Punjab.

Murree has been designated a calamity-hit region by the Punjab government after heavy snowfall caused havoc on the city. Punjab Chief Minister Usman Buzdar has recommended that government offices and rest homes be opened for stranded visitors, citing the pandemonium and emergency situation.

He directed to provide every possible relief to the tourists and accelerate the ongoing rescue operation to evacuate the people from the hill station.

The chief minister ordered to move additional resources from Rawalpindi and other cities to Murree to speed up the relief operation.

CM Buzdar was also directed to send his official helicopter to Murree for the rescue mission.