Raast, according to Imran Khan, would make it easier for the average man to do business over the phone and enhance savings rate 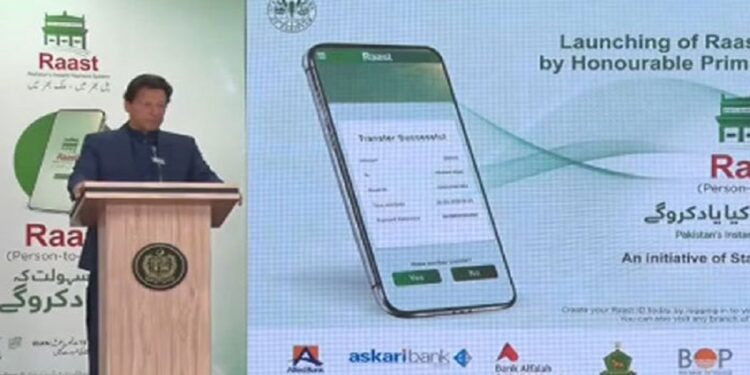 The Prime Minister remarked that by integrating the country’s inhabitants in the official economy via digitalization, they may be converted into a genuine asset.

Raast, according to Imran Khan, would make it easier for the average man to do business over the phone and enhance savings rates.

Imran Khan said that technological adaption may improve our saving rates and tax-to-GDP ratio in order to move the nation ahead. He said that the FBR is also using technology to track down people who are not paying taxes, regardless of their affluent lifestyle.

Imran Khan underlined the government’s commitment to lifting people out of poverty, adding that achieving the goal will be one of the current government’s major accomplishments.

The Prime Minister also instructed the Governor of the State Bank of Pakistan to create a dedicated cell to assist Pakistanis living abroad. He said that abroad Pakistanis are our most valuable asset and that we must continue to assist them.

In his comments, Finance Minister Shaukat Tarin described the Roast fast payment system as a “digital banking revolution” that would boost e-commerce and IT-related exports.

According to Shaukat Tarin, the Prime Minister will shortly announce additional steps to assist the lower middle and salaried classes who have been impacted by the price rise. Raast, he noted, may be employed in the execution of such efforts as well.

Dr. Reza Baqir, Governor of the State Bank of Pakistan, highlighted the important aspects of Raast, saying that this technologically sophisticated system, which is only accessible in a few nations, would be absolutely free and banks will not collect any fees. He requested that individuals use this technique to make their payments.

Reza Baqir, speaking about the central bank’s future plans, said that five new digital bank licenses would be given shortly, catering to the general public. He announced the development of a mechanism that would allow individuals to create bank accounts remotely via the NADRA system. According to him, this action would encourage more individuals to join the financial system.