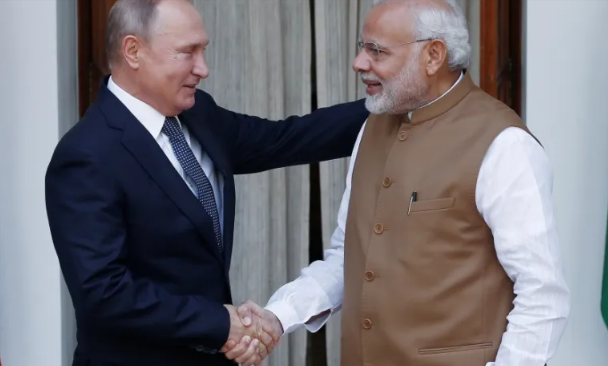 Since the beginning of Russia’s all-out invasion of Ukraine on February 24, the Indian government, and large segments of the Indian public, have firmly been on Putin’s side. Hashtags like #IStandWithPutin and #istandwithrussia trended on Indian social media, and the Indian government demonstrated – perhaps most notably by refusing to support UN resolutions condemning the invasion – that it is not willing to jeopardise its strong ties with Russia over Putin’s actions in Ukraine.

India’s approach to the situation in Ukraine is hardly surprising or atypical. Since the establishment of diplomatic ties following India’s independence in 1947, relations between Moscow and New Delhi have been shaped by a “high degree of political and strategic trust”. Across the years, Russia and India routinely took similar stances and supported each other on contentious international issues.

A partnership based on mutual trust

From the very beginning, Moscow saw its alliance with India as essential for offsetting American and Chinese dominance in Asia. And India always enjoyed the leverage that support from a major power like Russia provided in international politics.

In 1961, after India used its military to end Portuguese colonial sovereignty over Goa, Daman and Diu, for example, the US, the UK, France, and Turkey put forth a resolution condemning India and calling upon its government to withdraw its troops immediately. But the Soviet Union opposed the proposal.

In 1971, India and the Soviet Union signed the “Treaty of Peace, Friendship and Co-operation”. The treaty formalised India’s alliance with what was then a superpower and arguably ensured its preeminence in South Asia.

The Soviet Union and later Russia’s support for India on the issue of Kashmir has also been unrelenting and politically significant. In 1955, declaring support for Indian sovereignty over Kashmir, Soviet leader Nikita Khrushchev said, “We are so near that if ever you call us from the mountain tops we will appear at your side.” Since then, Moscow has been a bulwark against international intervention in Kashmir.

The Soviet Union vetoed UN Security Council resolutions in 1957, 1962 and 1971 that called for international intervention in Kashmir, insisting that it is a bilateral issue that needs to be solved through negotiations between India and Pakistan. And it took a similar stance on the Indo-Pak conflict in general. Such a stance was appreciated across the political spectrum in India.

In 1978, then Foreign Minister Atal Bihari Vajpayee – a founding member of the right-wing, Hindu nationalist Bharatiya Janata Party (BJP) who served as India’s prime minister between 1998 and 2004  – for example, put aside his ideological differences with the Soviet Union, and greeted a Soviet delegation to India saying, “our country found the only reliable friend in the Soviet Union alone”.

Since the fall of the Soviet Union, Russia has worked to maintain its special relationship with India.

In 2000, Russia’s President Vladimir Putin and then Prime Minister Vajpayee signed a “Declaration of Strategic Partnership”. In 2010, marking a decade of this strategic partnership, both countries signed the “Special and Strategic Partnership”. As part of this special partnership, Russia reaffirmed its pro-India stance on Kashmir. In 2019, when India scrapped Article 370 of its constitution that gave Jammu and Kashmir special status, the Modi government faced severe criticism in the international arena, but Russia once again deemed this to be an “internal matter” for India.

In January 2020, following a China-led push for international intervention in Kashmir, Dmitry Polyanskiy, Russia’s first deputy permanent representative to the UN, tweeted, “UNSC discussed Kashmir in closed consultations. Russia firmly stands for the normalisation of relations between India and Pakistan. We hope that differences between them will be settled through bilateral efforts.”

About the same time, after envoys of several countries announced their intention to visit Kashmir, the Russian Ambassador to India Nikolay Kudashev refused to do so. He said, “I do not feel there is a reason for me to travel. This is an internal matter belonging to the Constitution of India … This is not an issue for Russia. Those who believe that this is an issue, those who are concerned about the situation in Kashmir, those who doubt the Indian policies in Kashmir can travel and see for themselves. We never put it in doubt.”

New Delhi may not have the political clout that comes with being a permanent member of the UN Security Council, but since entering into a strategic partnership with the Soviet Union soon after independence, it has done everything it can to show its support for Moscow in the international arena.

In 1956, for example, India refrained from publicly condemning the Soviet Union’s violent suppression of the Hungarian revolution – this despite India’s then Prime Minister Jawaharlal Nehru being critical of Moscow’s actions in private.

More than a decade later, in 1968, when Soviet forces invaded Czechoslovakia to crush the Prague Spring, then Prime Minister Indira Gandhi gave a disapproving speech in the lower house of the Indian parliament but refrained from criticising Moscow on an international platform. India abstained from a subsequent vote on a resolution condemning the invasion.

When the Soviet Union entered Afghanistan in 1979 to prop up the new pro-Soviet regime, many in India – including Prime Minister Charan Singh – strongly opposed the invasion. However, having been the beneficiary of many Soviet vetoes across the decades, India once again abstained from voting in the UN General Assembly resolution condemning the Soviet Union. It was the only non-aligned country to do so.

The relationship between Russia and India, however, is not dependent only on UN vetoes and favourable political statements. The decades-old Indo-Russian alliance is also underpinned by a long history of bilateral collaboration on economic and strategic issues.

The Soviet Union was India’s largest trading partner until its collapse. Soviet economic contributions and technical know-how were essential in the establishment of India’s domestic industries, including oil and gas and mining. The Soviet Union also helped ensure India’s energy security. The first Indian citizen to travel to space, Rakesh Sharma, had done so through the Soviet Union’s Intekosmos programme.

Cultural exchanges have also been at the centre of Russia and India’s bilateral relations from the very beginning. Russian historians, philosophers and artists have expressed their admiration and respect for revolutionary and literary Indian figures. During the height of the Cold War, Hindi films were dubbed into Russian and were immensely popular among Muscovites. The Soviet Union also went to great lengths to ensure that Russian classic texts were available in India, setting up publishing houses that were solely focused on the Indian market.

As Deepa Bhasthi recounted in a recent essay, “For a generation that came of age at the cusp of that very strange period in India when socialism ended and capitalism was becoming wholeheartedly embraced, these books remain a kind of sentimental paraphernalia. The world depicted in the Russian stories was an exotic one … different in weather, names, food, and façades. But the affordable books made it a world its readers felt able to touch, to sense and know well.”

Of course, the most enduring aspect of the Indo-Russian ties has been the military cooperation between the two countries.

The Soviet Union is said to have supplied India during the years with enough military hardware to equip several fleets. This has included “aircraft carriers, tanks, guns, fighter jets, and missiles”. The Soviet Union was also central to the creation of the Indian navy and, in the 1980s, it even leased a nuclear-powered submarine to India.

This Soviet-era legacy has persisted post-1991. Russian-origin weapons are believed to account for 60 to 85 percent of the hardware of the Indian armed forces today.

According to the Stockholm International Peace Research Institute, Russia was the second-largest global arms exporter to India between 2016 and 2020. As its largest importer, India received 23 percent of Russian hardware. Admittedly, compared with 2011-2015, exports to India dropped by 53 percent. However, there are several recent deals in the works. This includes a deal to buy state-of-the-art air defence systems, a Russian proposal to build AIP-powered conventional submarines, as well as a plan to lease two Russian nuclear-ballistic submarines.

A tricky path ahead

In light of this long history of strong diplomatic, military, cultural and economic ties, it is hardly surprising that the Indian government and the public at large, chose to stand with Russia as it faced condemnation from the international community.

India wants to maintain a positive relationship with Russia because it needs Moscow’s support in resolving its territorial conflicts with its neighbours, especially China. It also wants to continue to enjoy economic and military support from Russia. Furthermore, as Russia repeatedly supported India at the UN on issues like Kashmir, many Indians feel as if it is now their turn to return the favour.

Maintaining support for Russia is not going to be easy for India in the coming weeks and months – especially as Moscow, facing crippling sanctions, comes closer to officially becoming a pariah state.

India, however, is experienced in maintaining a needs-based partnership with pariah states. It did so with Iran, for example, despite mounting pressure from the US. Furthermore, under Modi’s leadership, India cultivated strong relationships with other authoritarian leaders like Putin, who had received much criticism from the international community because of their rhetoric and actions, on issues like human rights, democracy and migration, in recent years. Modi famously enjoyed a “bromance” with populist right-wing US President Donald Trump. Under Israel’s far-right leader Benjamin Netanyahu, Israel laid the foundations for a robust economic and strategic alliance with India. In 2020, Brazil’s far-right President Jair Bolsonaro was a guest of honour at India’s annual Republic Day celebration in New Delhi.

But all this does not mean India will maintain its support for Russia whatever it does. In recent years, New Delhi has been rapidly strengthening its ties with the West, and it may soon become too costly for it to maintain its traditional ties with Moscow.

Indeed, if Russia fails to score a decisive victory in Ukraine, or struggles to maintain its economic and military influence in Asia due to sanctions, the Indian government may feel the need to reassess its stance on Putin.

But, at least for now, no one should be at all surprised that India is “standing with Russia” and “supporting Putin”. 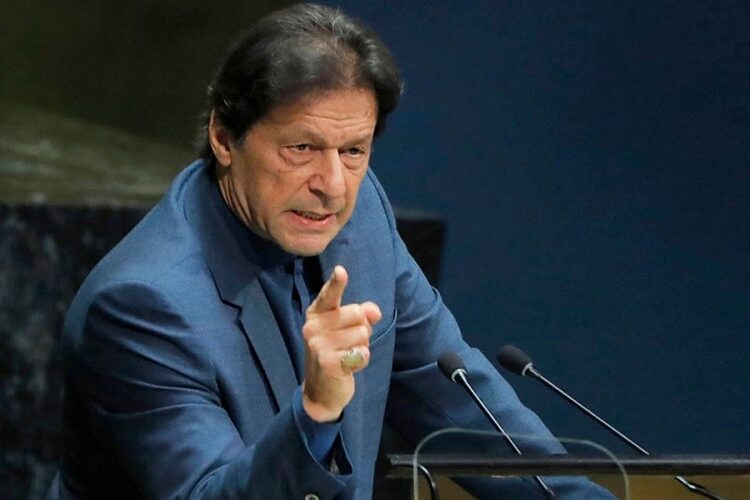