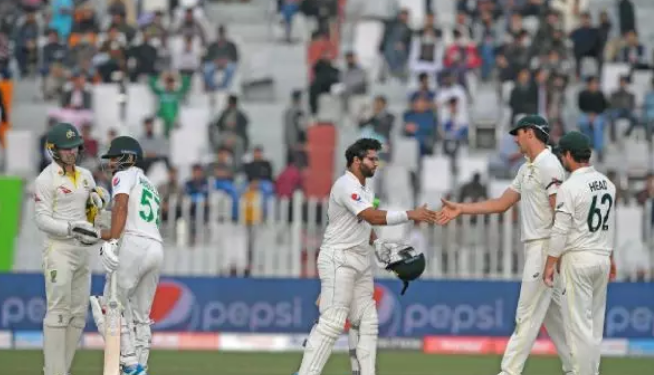 Australia vs Pakistan a historic first test match played in Rawalpindi ended in a boring draw on Tuesday as Imam-ul-Haq cracked a century in both innings and his opening partner Abdullah Shafique made a maiden hundred in Pakistan’s first home Test against Australia in 24 years.

Australia’s much-hyped first Test on Pakistan soil since 1998 — they previously refused to visit on security grounds — was ultimately ruined by a flat Rawalpindi Cricket Stadium pitch.

Initially in reply to Pakistan’s first innings score of 476-4 declared Australia put 459 scores on board.

In Pakistan’s second innings, Shafique made an unbeaten 136 while Imam-ul-Haq finished on 111 following up his 157 in the first innings with Pakistan finishing for 252 runs without loss.

Thanks to Rawalpindi’s lifeless pitch that a joint total of 1,187 runs scored for just 14 wickets over five days as the famous Australian pace trio of Pat Cummins, Mitchell Starc, and Josh Hazlewood — with 674 Test wickets between them before this match — got just one more.

With a draw dead clear, the Pakistani openers took the opportunity for batting practice ahead of the second Test in Karachi starting Saturday, 12 March 2022.

Also, they created some new records as they became the first Pakistan pair to put on a century opening stand in both innings of a Test against Australia after teaming up for 105 on Friday.

Their stand is Pakistan´s highest for the first wicket against Australia in all Tests, bettering the 149 set by Khalid Ibadullah and Abdul Kadir in Karachi in 1964.

So dominating were the two openers that it became only the first time in 51 years when Australia conceded 100-plus opening stands in both innings of a Test.

25000 prize bond draw list will be announced on tomorrow!