by Web Desk
in mma, Sports
0 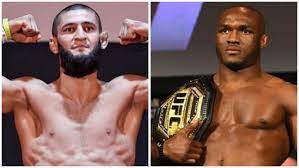 Kamaru Usman has reacted after UFC President Dana White suggested that Chimaev vs. Burns will be a #1 contender fight.

UFC 273 which takes place on April 9th in Jacksonville, Florida, will feature Khamzat Chimaev (10-0 MMA) vs Gilbert Burns (20-4 MMA) in a welterweight bout.

Kamaru Usman has weighed in on Dana White suggesting it will be a #1 contender fight.

During the UFC 272 post-fight press conference, Dana told media members that having Chimaev and Burns compete for a UFC Welterweight Title shot doesn’t sound too bad.

That belief was shared by the champion during a media scrum prior to the UFC 272 weigh-ins in Las Vegas last week.

“Well, I mean, this guy hasn’t even fought in the top 10. He hasn’t even beat anyone yet,” said Usman (h/t MMANews). “So, I mean, Covington is still standing in the way. So I think there’s still a couple more fights that he has to get through. But, like I say, I love to compete. When that fight presents itself, I’ll be here to compete.”

Kamaru Usman (20-1 MMA), the welterweight champion, who’s only loss was to Jose Caceres (15-12 MMA) way back in May of 2013. ‘The Nigerian Nightmare’ doesn’t believe Khamzat hasn’t earned the right for a #1 contender fight as he hasn’t even fought in the top 10.

Apple Event March 2022: What We Can Expect From Apple's Event Tomorrow