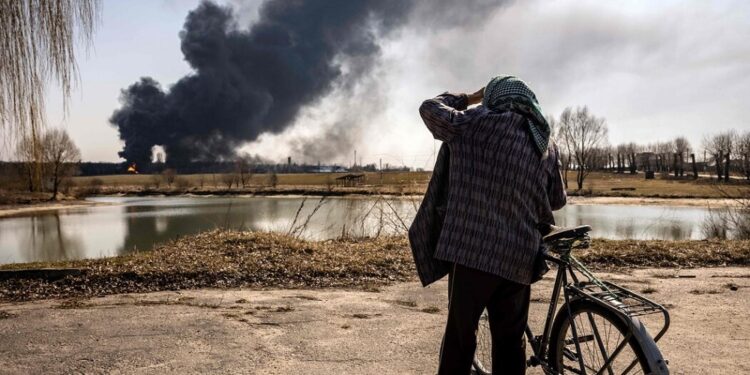 Russia’s military ministry said Tuesday that it had conducted dozens of airstrikes over eastern Ukraine overnight as conflict raged in the Donbas area. The “new chapter” of the war, according to Russia’s top diplomat, has started.

Ukraine’s military forces also reported that battle had intensified in the east, only hours after President Volodymyr Zelensky said that Russia had begun its long-awaited onslaught in the country’s industrial heartland.

In a report released early Tuesday, the general staff of Ukraine’s armed forces said that “Russian invaders have increased offensive operations along the whole line of contact.”

During an interview with a top Indian news site, Russia’s Foreign Minister Sergei Lavrov seemed to accept the new attack.

“Another phase of this operation is starting, and I am certain it will be a pivotal point in this whole special operation,” Lavrov said on Tuesday to India Today.

Ukrainian authorities had encouraged civilians in Donbas to travel west ahead of the offensive, even as evacuations from frontline towns were halted for the third day in a row owing to continued fighting.

“We will fight no matter how many Russian troops are sent here.” “We’ll protect ourselves,” Zelensky stated late Monday on Telegram.

Russian President Vladimir Putin has said that the so-called military action began on February 24 in order to defend Russian speakers in Ukraine from a “neo-Nazi” regime’s “genocide.”

“We are bombarded everywhere,” Nadya, 65, of Novodruzhesk, a Donbas settlement, said.

“We’re still alive by a miracle,” she continued, her voice shaking.

“We were waiting on the ground,” says the narrator. We’ve been sleeping in the basement since February 24.”

Control of the Donbas region and the besieged port of Mariupol would enable Moscow to build a southern corridor to the Crimean peninsula, which it seized in 2014, depriving Ukraine of most of its coastline and a vital income source.

Russia’s campaign to retake the beleaguered port city of Mariupol resumed in the south, with Moscow issuing a new demand for the city’s defenders to surrender and announcing the creation of a humanitarian corridor for Ukrainian forces who consented to lay down their guns.

Pavlo Kyrylenko, the head of the Donetsk region’s military administration, claimed Mariupol was still disputed in a CNN interview on Tuesday.

“The Ukrainian flag is flying high over the city,” Kyrylenko said. “I can’t claim the Russians have them under control.” It’s simply that there’s a lot of violence on these streets.”

The first supplies of a fresh $800 million (740 million euro) US military assistance package arrived at Ukraine’s borders this week, and will be used to combat Russian soldiers.

Even as it progressively enraged Moscow, Washington was set to conduct a video chat with allies on Tuesday to address the war in Ukraine.

In a televised conference with senior military commanders, Russia’s defence chief Sergei Shoigu said, “The United Governments and Western states under its control are doing all they can to prolong the military operation.”

“The increasing number of foreign weaponry supply starkly demonstrates their goal to provoke the Kyiv government into fighting to the death.”

While most of the attention has been focused on Ukraine’s east, Moscow has also launched air attacks in the country’s west, killing at least seven people in the city of Lviv near the Polish border on Monday.

Since Russia invaded on February 24, Lviv has been mostly spared shelling, and the city and its environs have become a sanctuary for individuals seeking refuge from the conflict.

Even as attacks continued to impact sites around the nation, Russia looked to be concentrating its efforts in the east.

Sergiy Gaiday, the regional governor of the eastern Lugansk area, claimed Ukrainian soldiers were holding their territory despite intense battle.

Russia war in Ukraine, according to the IMF, will' severely set back' the global economy