Cheryl Lynn Johnson is an American politician serving as the 36th Clerk of the United States House of Representatives since February 26, 2019 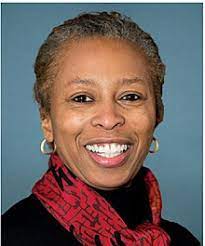 Johnson was born to Reverend Charlie and Cynthia Davis in New Orleans, Louisiana.

Johnson completed a bachelor’s degree in journalism and mass communication from the University of Iowa in 1980. In 1984, she graduated from the Howard University School of Law with a J.D. She is a Harvard Kennedy School senior management program graduate

Johnson served as the chief education and investigative counsel for the House Committee on Education and the Workforce. She was the principal policy advisor and spokesperson for the Committee. She primarily focused on elementary and secondary education issues, juvenile justice, child nutrition, labour issues, but also older Americans’ employment and nutrition programs.

After nearly twenty years in the House of Representatives, Johnson went on to serve in the Smithsonian Institution’s Office of Government Relations for ten years, serving one of those years as director.

The Honorable Cheryl Lynn Johnson is the 36th Clerk of the United States House of Representatives. If McCarthy is not voted speaker tomorrow, Ms. Johnson will preside over the House. Yes, a Black woman. Nancy Pelosi never missed when she assigned positions. pic.twitter.com/KlTBiGRwwE

Clarence Ellison and Johnson’s son make their home in Chevy Chase, Maryland, where Johnson also resides with her husband.

She is board certified in both the District of Columbia and Louisiana. Both the Nineteenth Street Baptist Church and the Faith and Politics Institute have boards of directors that she is a member of.