Pete Alonso is a Major League Baseball first baseman for the New York Mets in the United States (MLB). During the 2019 season, he made his MLB debut and set a major league record for the most home runs by a rookie with 53. He was also the first Mets player to hit 50 home runs or more in a season, breaking the Mets’ single-season home run record. 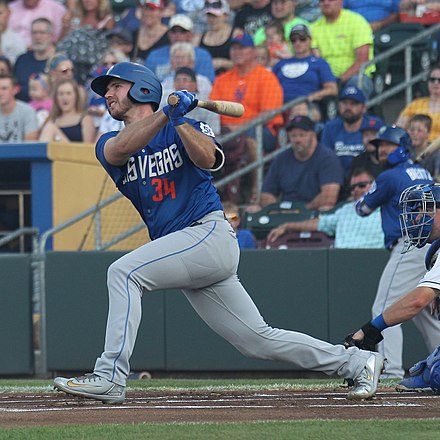 Manny Machado  has a married status. In November 2021, he will marry his long-term lover Haley Alonso. She is a fashion blogger and figure skater from the United States. They got married in 2018.

Pete Alonso’s full name is Peter Morgan Alonso, and he goes by the moniker “Polar Bear.” He was born on December 7, 1994. He is now 27 years old. His hometown is Tampa, Florida, in the United States. His astrological sign is Sagittarius. He has a Christian nationality. He finished her high school education at Plant High School. He is highly competent, having graduated from the University of Florida.

Pete is a more wealthy American professional baseball first baseman. His net worth is $3 million dollars.

The New York Mets picked Alonso in the second round of the 2016 Major League Baseball draught, with the 64th overall choice. He signed with the Mets for a $909,200 signing bonus and spent the 2016 season with the Brooklyn Cyclones of the Class A-Short SeasonNew York-Penn League, where he hit.322 with five home runs and 21 RBIs in thirty games. He was selected to play in the league’s All-Star Game. He began the 2017 season with the Class A-AdvancedFlorida State League’s St. Lucie Mets, and after batting.286 with 16 home runs and 58 RBIs in 82 games, he was promoted to the Class AAEastern League’s Binghamton Rumble Ponies in August, where he batted.311 with two home runs and five RBIs in 11 games.

Alonso was named the Mets’ starting first baseman on Opening Day in 2019. On March 28, he was in the starting lineup and earned his first big league hit against Washington Nationals pitcher Justin Miller in the eighth inning. On July 7, Alonso became the second player in Mets history, behind Dave Kingman, to smash 30 home runs before the All-Star break (1976). Alonso won the 2019 MLB Home Run Derby on July 8, beating Toronto Blue Jays third baseman Vladimir Guerrero Jr. 23-22 in the final round, becoming just the second rookie to do so after Aaron Judge. Alonso defeated Carlos Santana and Ronald Acua Jr. on his route to the final round, hitting 57 home runs in total throughout the Derby.

Alonso appeared in 57 of the 60 games in the 2020 season, which was cut short by COVID-19, and batted.231/.326/.490 with 16 home runs and 35 RBIs. He hit his first career walk-off home run on September 3, 2020. Alonso’s second season was a step back from his outstanding rookie season; Yahoo Sports’ Danny Abriano dubbed it “a season to forget,” while the New York Post’s Zach Braziller labelled it “underwhelming.” He did, however, have the greatest maximum exit velocity of any big league bat, measuring 118.4 mph. Alonso’s sophomore flop, along with Dominic Smith’s second straight breakthrough season, has several talent evaluators favouring the latter as the team’s starting first baseman moving into the 2021 season.

Alonso signed a $7.4 million deal with the Mets on March 22, 2022, avoiding salary arbitration. On April 9, 2022, Alonso hit his first career grand slam against the Washington Nationals in the fifth inning off of pitcher Joan Adon. In the sixth inning of a game against the Miami Marlins on June 17, 2022, Alonso blasted his second career grand slam against pitcher Tommy Nance. Alonso was nominated to the 2022 MLB All-Star Game as a representative for the National League on July 10, 2022, his second selection in his career. He was named a reserve for the team, with St. Louis Cardinals first baseman Paul Goldschmidt starting. He has also accepted his third straight nomination to the Home Run Derby, adding that he would be pitched to by former Mets pitching coach Dave Jauss. Jauss currently works for the Washington Nationals, but he has kept in touch with Alonso and committed to throw in the Derby again.